Last Wednesday night I went to life drawing class and had an opportunity to draw two models in the same sitting. They were life partners, so very comfortable with each other. 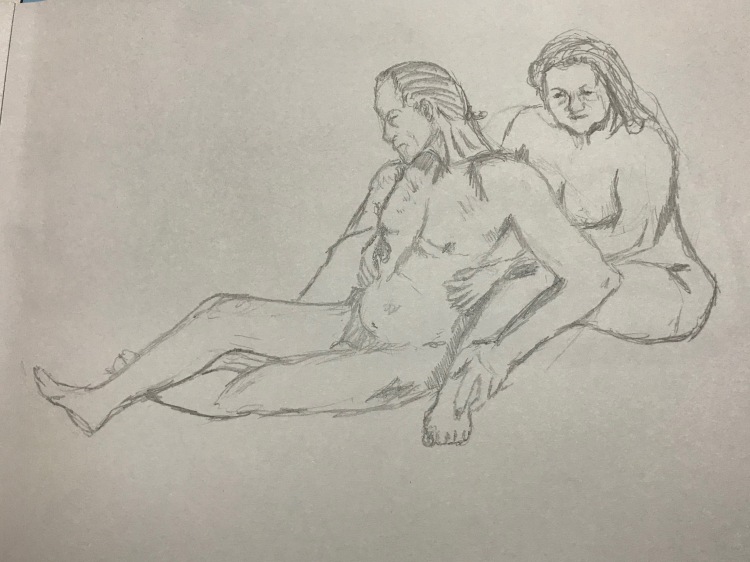 This drawing (above) was my favourite from the night. It wasn’t easy to do as I had to look at each section individually and suggest connections between the entangled areas of their bodies. I still got a few things mis-aligned but for the most part I captured a good likeness to them, their pose and the mood of the pose.

The drawing above where five minute poses. I used a white Poca pen for the guy and then added blue soft pastel to bring him and the shadows to life. The woman was drawing with blue soft pastel and white conte. She was sitting on a stool but I didn’t have time to sketch that in. I was pleased with how well the blue stood out on the black paper.

The woman (above) was drawn first in light pencil sketches and then in black ink pen. The man was drawn in 2B pencil. I had a little trouble getting his proportions at first but after a few under sketches he came together eventually. 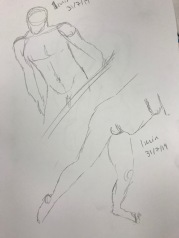 The sketches above range in time – 30 seconds, 1 minute, 2 minutes and 5 minutes. They were mostly warm up sketches at the start of the night.

I’m looking forward to seeing how my rendering of the human form develops over the next year as I attend. I’m a little concerned that my drawings are too tight and I need to loosen up. But art is a work in progress kind of thing, so I’ll keep giving it a go.

I think if you’re interested in attending a life drawing class, you should take the opportunity to get along and give drawing the human form a go. It’s not easy but if you concentrate on looking at the negative space around the limbs, head and shoulders and other area of the body, you’ll find that your drawings will appear on the page. 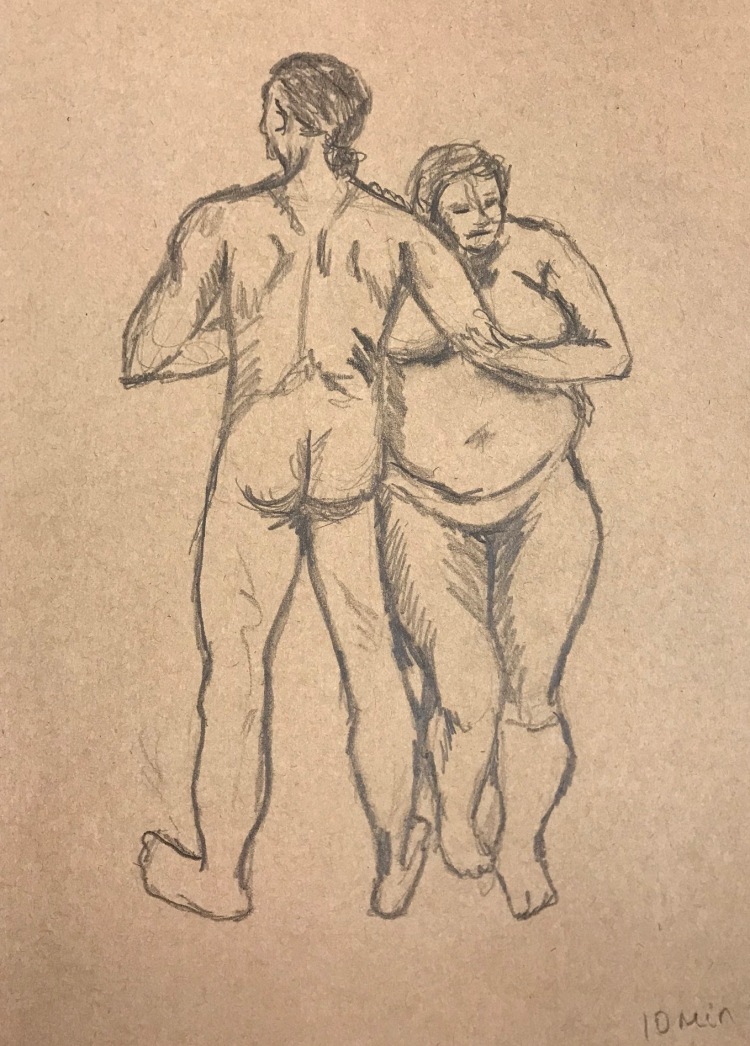 I was asked in last week’s class how I got the two models on the page and in proportion.

I’m not sure if you’re interested in my process, but here it is:

Basically I look at the negative space between the limbs and around them. I then look for what I call ‘anchor points’ between the two figures. So, in the above drawing, I noticed that the crease of his bottom was in alignment with her belly, the feet were on the same line, and her head was resting on his shoulder.

When I have all of those areas figured out, I was able to focus on drawing the lines and shapes rather than getting confused and overwhelmed with the idea of drawing the human body.

I also start drawing general shapes in from the top of the head to the feet, then I develop detail as I go.

For me, I have to be relaxed and in the flow to draw from life. It takes a little time for my mind to quiet down and then I just draw.

4 thoughts on “Life Drawing a Couple”